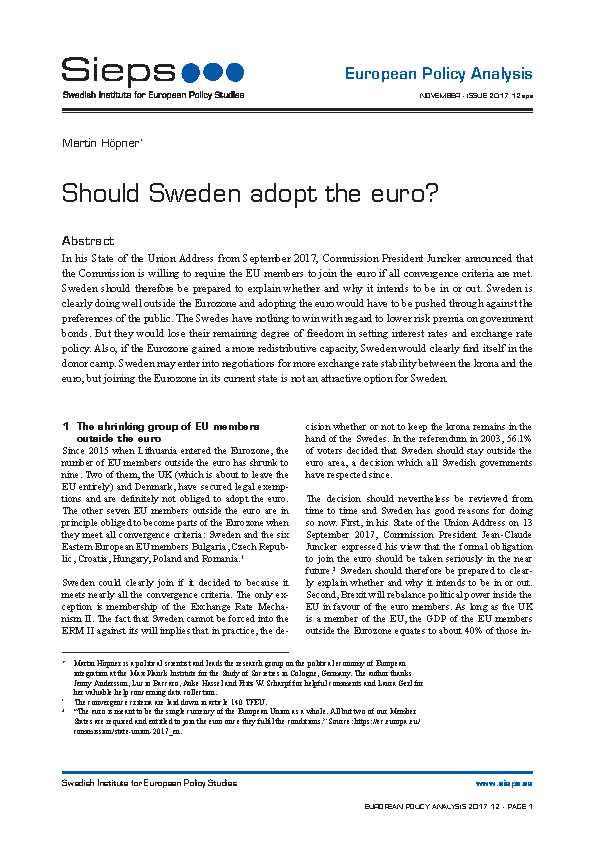 Today, 9 out of 28 EU member states have not adopted the euro. While Denmark and the UK enjoy permanent derogations, at this stage six member states do not fulfil the so called convergence criteria. Only Sweden has the ability to become a full member of the Economic and Monetary Union (EMU) in a fairly short time span, should it choose to do so. As a matter of fact, Sweden is obliged to join, as all member states have committed themselves to enter the euro area once they meet the convergence criteria.

Even though a member state can hardly be forced to adopt the euro, European Commission President Jean-Claude Juncker recently announced that the obligation to join might be taken more seriously in the future. Hence Sweden should be prepared to argue convincingly for its decision to remain outside the euro. This point is made by Martin Höpner at the Max Planck Institute in Cologne, Germany, who leads a research team that analyses the political economy of European integration.

In this European Policy Analysis, he weighs the pros and cons for Sweden to adopt the euro. Key aspects discussed: euro area integration, public support for the euro in Sweden, economic performance, exchange rate and interest rate autonomy, risk premia on government bonds and the potential future transfer union among euro countries.