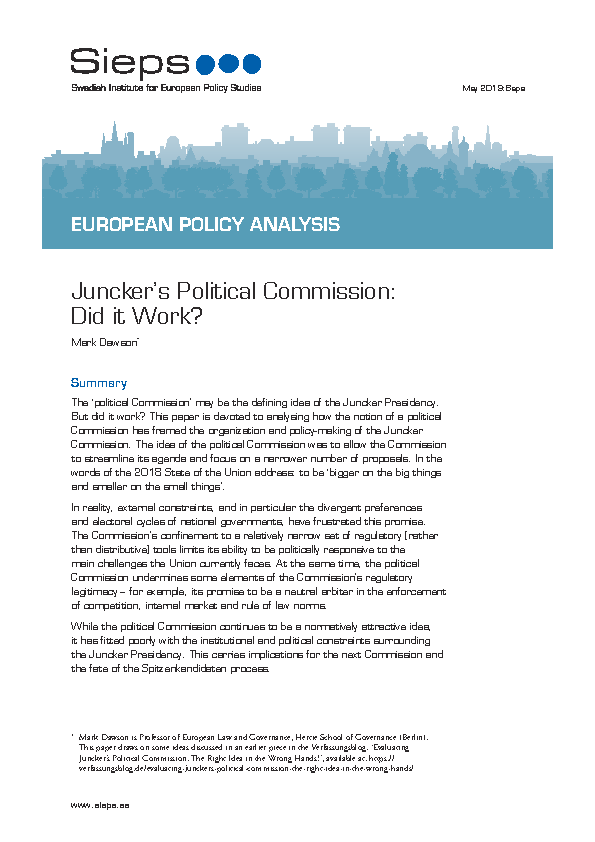 To meet the EU’s largest problems, the European Commission must take political decisions. This goal was formulated by newly elected President Jean-Claude Juncker in 2014. The ambition involved a streamlining of the agenda, an internal re-organization as well as changes in the coordination with other EU institutions.

What were the effects of the goals that Juncker set out? In this European Policy Analysis, Professor Mark Dawson explores three aspects: agenda-setting, working methods and the legislative process.

The author shows that the Commission tabled most of its envisaged proposals but has had difficulties turning them into law. The ability to deliver the policy agenda is still in the hands of other actors, most notably the European Council.

Yet, the author argues, today there are few alternatives to a political Commission. Since the EU is increasingly engaging in contested questions, the role as a neutral regulator is no longer possible.

The idea of a clearer link between the Commission’s proposals and political choices also carries the possibility to make the EU more democratic. The conclusion is therefore that the demand for a political Commission is likely to outlive the Juncker Presidency.

Mark Dawson is Professor of European Law and Governance at Hertie School of Governance in Berlin.