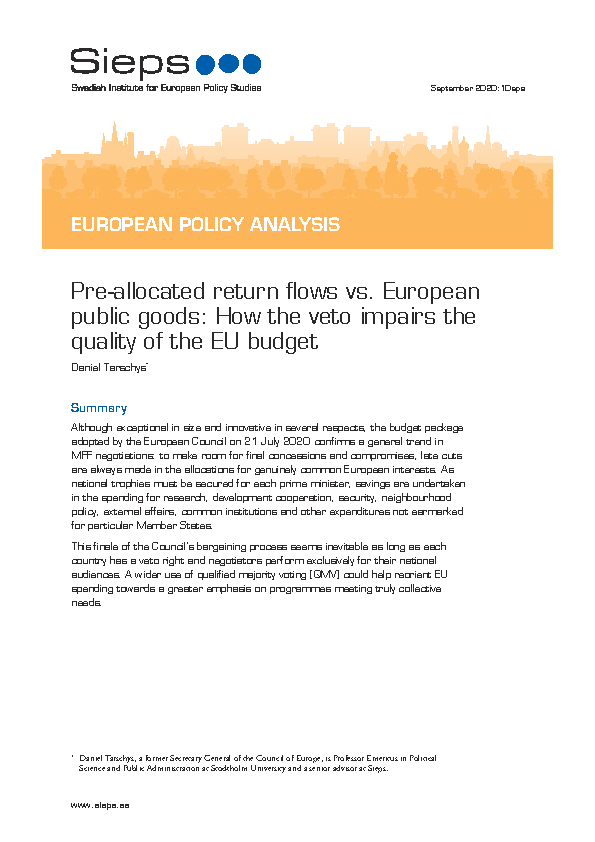 The budget package adopted by the European Council on 21 July is the result of the sixth round of negotiations on the EU’s multi-annual framework (MFF). Exceptional in several respects, the deal’s most striking innovation is the jump in the EU’s financial capacity through the combination of the MFF with a loan-financed recovery package.

At the same time, it follows recurrent patterns in granting Member States many special allocations. This weakness was as usual exacerbated towards the end of the negotiation round, says Daniel Tarschys, senior advisor at SIEPS, in an analysis where he discusses the stages and the outcome of the negotiations.

On the hand, the concessions made to individual Member States facilitate agreement, but on the other hand they led to further cuts in the already weak spending for collective needs.

Among the concessions to individual member states:

All in all, the earmarked changes add up to at least 17 billion euro. This implies cuts in allocations for investments in collective goods, such as the single market, innovation, natural resources and border management.

While the national veto in financial issues is considered fundamental, the author writes, it impairs the quality of the budget. A wider use of qualified majority voting could therefore be key: new voting rules could help reorient EU spending towards meeting truly collective needs – to the benefit of all.