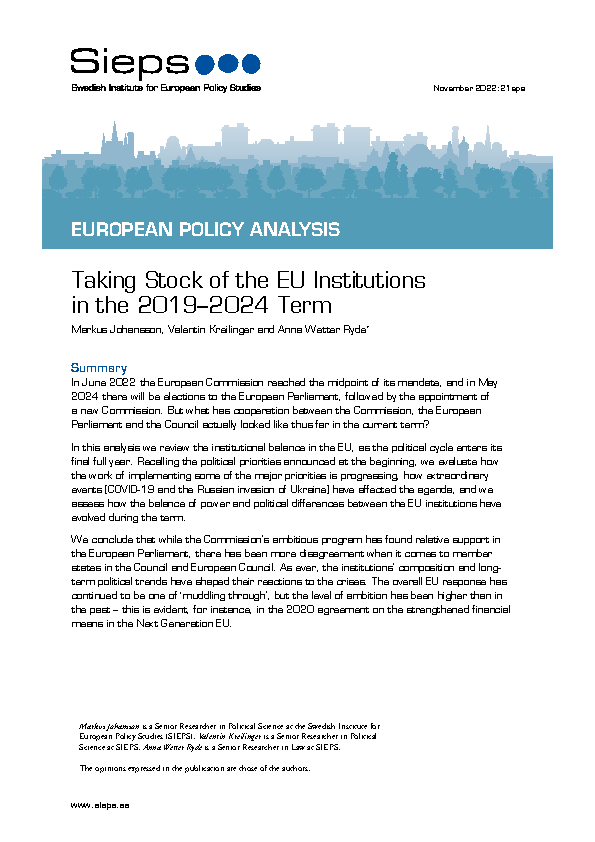 The 2019–2024 term was always going to be busy. Incoming Commission President Ursula von der Leyen outlined an ambitious programme which sought, among other things, to meet the challenges of the digital age, to strengthen Europe’s role in the world, and to mitigate the intensifying climate crisis.

Achieving these aims would require cooperation with the European Parliament and the Council of the EU. In this analysis, Markus Johansson, Valentin Kreilinger and Anna Wetter Ryde first examine the internal dynamics of the three institutions since 2019 and go on to describe how these dynamics have affected the relationships between them and the policy outcomes, from Fit for 55 to Next Generation EU.

The European Parliament suffered a setback when the ‘lead candidate’ procedure for appointing the Commission President was not followed, and its composition is more fragmented than in the past: the two traditionally dominant centre-left and centre-right groups have lost ground relative to the liberal centre and fringe parties. In the Council, reaching decisions by consensus remains the norm despite the formation of new blocs, such as the ‘frugals’, and pronounced differences on key questions such as the rule of law. Like their masters in the European Council, ministers have been increasingly occupied by crisis management.

Because during this period, the EU has continued to be buffeted by extraordinary crises: first the COVID-19 pandemic then Russia’s invasion of Ukraine – a sovereign state and close partner of the EU which borders four member states. The authors therefore also consider how the EU responded to these external shocks; how the crises affected the institutional balance of power and how they shaped and redirected the ambitions expressed at the start of the cycle.

The paper was presented and discussed at a SIEPS webinar on 30 November which can be watched here.