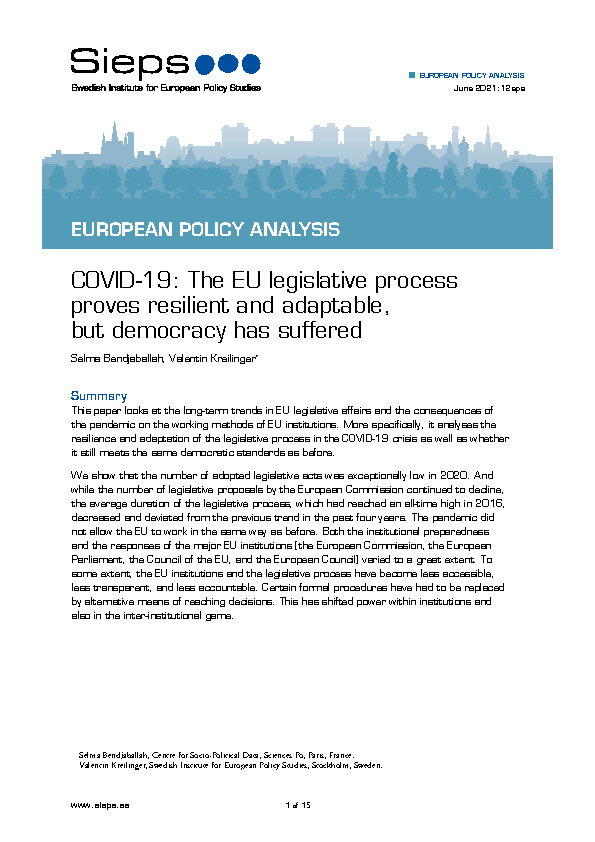 The pandemic did not allow the EU institutions to work in the same way as before. Certain formal procedures have had to be replaced by alternative means of reaching decisions, a transition that revealed great variation regarding both the institutional preparedness and the responses of the major EU institutions.

In this European Policy Analysis, Valentin Kreilinger, senior researcher in political science at SIEPS, and Selma Bendjaballah, researcher in political science at Sciences Po Paris, examine the extent to which this transition has affected the working methods of EU institutions, the legislative process as well as the power within and between the EU institutions. The effects are analysed against the long-term trends in EU legislative affairs.

Three key words guide the analysis: the resilience and adaptation of the legislative process in the COVID-19 crisis, and democracy, or more specifically, whether EU legislation meets the same democratic standards as before.

Although the number of legislative proposals by the European Commission has declined since 2010, the authors show that the number of adopted legislative acts was exceptionally low in 2020. To some extent, the EU institutions and the legislative process have also become less accessible, less transparent, and less accountable.

The authors conclude that this has shifted power within and between the institutions. Furthermore, some key democratic foundations have suffered, one being the marginalisation of the European Parliament in the crisis response.

While it remains to be seen which of the institutional changes will be permanent and which ones will disappear, the authors assume that the EU could become more negotiation-oriented.