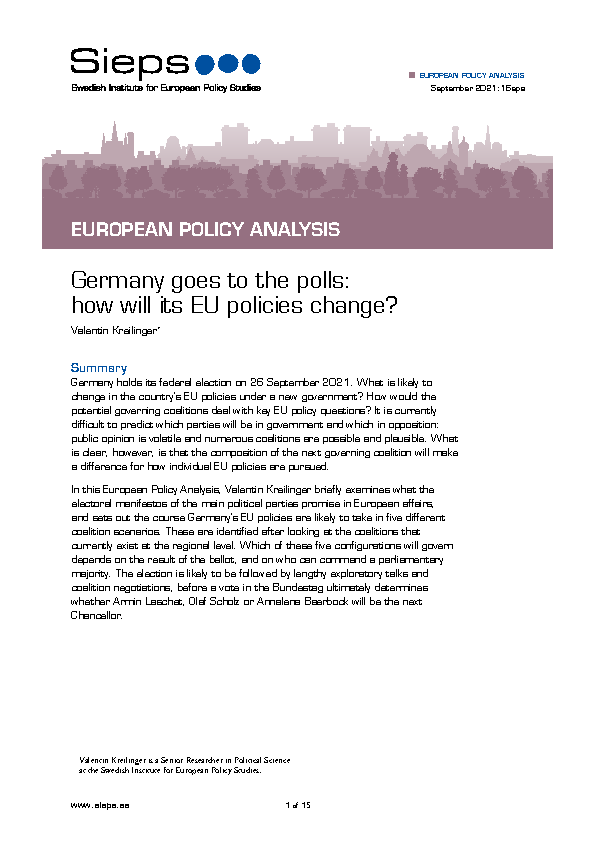 Germany’s role in the EU has never been more important, not least in the European Council which has grown more powerful with each recent crisis. Four weeks before the Federal election it is extremely difficult to predict which parties will govern Germany, or who will sit in EUCO as Chancellor. The only certainty is that for the first time in sixteen years it will not be Angela Merkel.

In this European Policy Analysis Valentin Kreilinger, Senior Researcher in Political Science at SIEPS, describes the process of government formation, and the likely EU policy consequences of the possible outcomes.

What do Germany’s parties promise in terms of EU policies? Except for the AfD, and to a lesser extent the Left party, they all suggest continuity rather than rupture. But there are significant differences in how they approach key EU questions such as the Conference on the Future of Europe, defence integration or the return to common fiscal rules following the end of the Covid crisis.

No party will govern alone, and there are five coalitions which look plausible at the national level. The EU policy of any of these will be the product of compromise and sacrificed ambition. At least one major party will find itself in opposition, where its EU policies could well harden. If the CDU/CSU goes into opposition none of the five biggest EU countries (Germany, France, Italy, Spain, Poland) would have an EPP Head of State or Government.

A new chancellor – and the absence of the old – will have a significant impact. He or she will be expected to lead and to find consensus in Brussels, but is likely to focus on domestic politics in the first months of their Chancellorship. This may leave a leadership vacuum, particularly important when it comes to the EU’s geopolitical position.