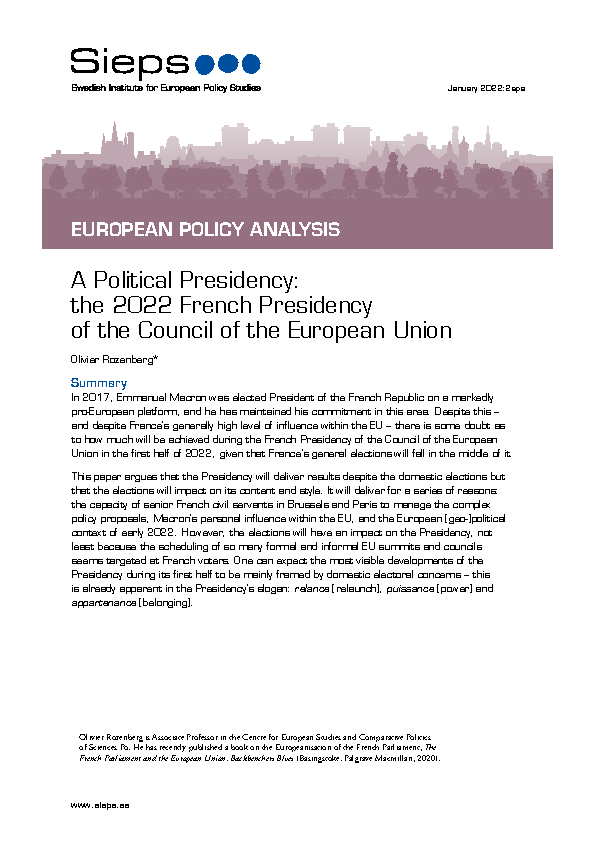 While France has one of the most Eurosceptic publics in the EU, its leader is one of the most integrationist. After a slow start, Macron has made his mark at EU level, from putting strategic autonomy firmly on the agenda to Europeanizing debt-funded stimulus to mitigate the economic effects of the pandemic. Now that the term is almost at an end, he has a further opportunity to shape the future of the EU by setting the priorities for the French Presidency of the Council of the EU.

Olivier Rozenberg, Associate Professor in the Centre for European Studies and Comparative Politics of Sciences Po in Paris, describes the radicalisation of the EU debate in France and Macron’s impact at EU level as a background for the Presidency’s extensive and ambitious agenda. The Elysée has announced that it wants to build a greener, more sovereign, more social, digital and human Europe. The author unpacks those priorities and assesses the degree to which the domestic political context has shaped them.

Ultimately, the author argues, this is likely to be a successful Presidency – one that delivers on its ambitions – because of the experience of the French bureaucracy and Paris’s solid relations with Berlin and Rome. But those ambitions and how they are pursued will be strongly influenced by the presidential election in April, where Macron likely will stand for re-election, and the parliamentary elections in June.