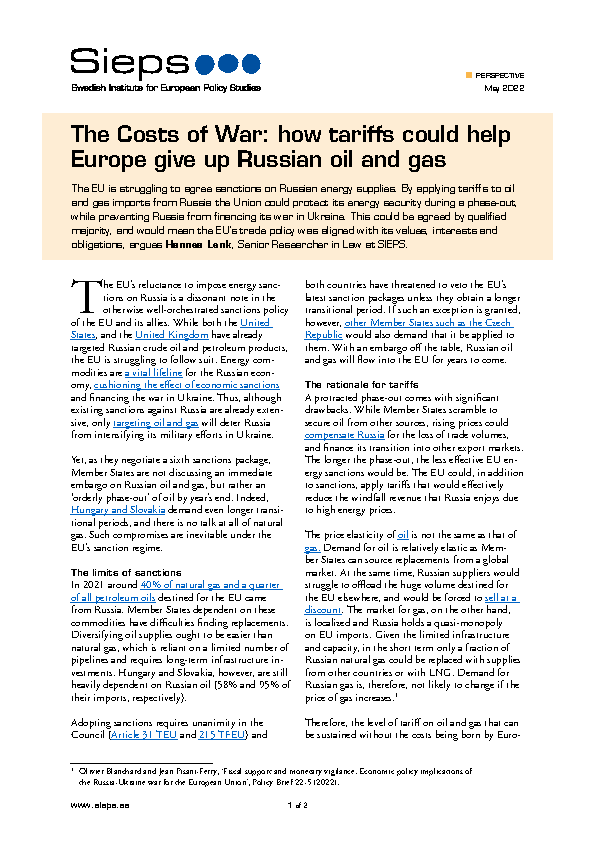 The EU’s reluctance to impose energy sanctions on Russia is a dissonant note in the otherwise well-orchestrated sanctions policy of the EU and its allies. While both the United States, and the United Kingdom have already targeted Russian crude oil and petroleum products, the EU is struggling to follow suit. Energy commodities are a vital lifeline for the Russian economy, cushioning the effect of economic sanctions and financing the war in Ukraine. Thus, although existing sanctions against Russia are already extensive, only targeting oil and gas will deter Russia from intensifying its military efforts in Ukraine.

Yet, as they negotiate a sixth sanctions package, Member States are not discussing an immediate embargo on Russian oil and gas, but rather an ‘orderly phase-out’ of oil by year’s end. Indeed, Hungary and Slovakia demand even longer transitional periods, and there is no talk at all of natural gas. Such compromises are inevitable under the EU’s sanction regime.

The limits of sanctions

In 2021 around 40% of natural gas and a quarter of all petroleum oils destined for the EU came from Russia. Member States dependent on these commodities have difficulties finding replacements. Diversifying oil supplies ought to be easier than natural gas, which is reliant on a limited number of pipelines and requires long-term infrastructure investments. Hungary and Slovakia, however, are still heavily dependent on Russian oil (58% and 95% of their imports, respectively).

Adopting sanctions requires unanimity in the Council (Article 31 TEU and 215 TFEU) and both countries have threatened to veto the EU’s latest sanction packages unless they obtain a longer transitional period. If such an exception is granted, however, other Member States such as the Czech Republic would also demand that it be applied to them. With an embargo off the table, Russian oil and gas will flow into the EU for years to come.

The rationale for tariffs

A protracted phase-out comes with significant drawbacks. While Member States scramble to secure oil from other sources, rising prices could compensate Russia for the loss of trade volumes, and finance its transition into other export markets. The longer the phase-out, the less effective EU energy sanctions would be. The EU could, in addition to sanctions, apply tariffs that would effectively reduce the windfall revenue that Russia enjoys due to high energy prices.

The price elasticity of oil is not the same as that of gas. Demand for oil is relatively elastic as Member States can source replacements from a global market. At the same time, Russian suppliers would struggle to offload the huge volume destined for the EU elsewhere, and would be forced to sell at a discount. The market for gas, on the other hand, is localized and Russia holds a quasi-monopoly on EU imports. Given the limited infrastructure and capacity, in the short term only a fraction of Russian natural gas could be replaced with supplies from other countries or with LNG. Demand for Russian gas is, therefore, not likely to change if the price of gas increases.[1]

Therefore, the level of tariff on oil and gas that can be sustained without the costs being born by European consumers will also differ.[2] The optimal tariff would find the spot where the pre-tariff commodity price increases by less than the tariff itself. If distributed correctly, the revenue created by such a tariff for the EU could offset consumer price increases; whatever is left could be employed to support Ukraine or Ukrainian refugees in the EU.

Tariffs offer an effective means to address EU’s energy security during a phase-out while reducing Russia’s revenues from oil and gas. The planned phase-out should therefore be complemented with tariffs on oil and gas. The EU has already revoked Russia’s MFN status in the WTO, a tariff on Russian oil and gas would not raise issues of WTO compliance. Although this idea has been taken up by research and media outlets it has yet to gain real political traction.

The imposition of a tariff on Russian energy commodities would be difficult to square with the aims of Article 194 TFEU – the only explicit EU competence for energy policy.[3] They could instead be adopted on the basis of Article 207 TFEU – the EU’s common commercial policy. This idea has attracted some criticism. Because the primary objective of a tariff is to sanction Russia rather than govern trade relations, the common commercial policy might not meet the test for legal basis set by the Court of Justice of the European Union.[4]

However, Article 21(1) TEU requires that the common commercial policy is implemented with respect for human rights and the principles of the UN Charter and international law. Considering the atrocities conducted by Russia in Ukraine, let alone the unprovoked aggression against a sovereign state itself, I argue that the EU must align its commercial relations with Russia with the EU Treaties. Tariffs on Russian energy commodities are not, therefore, sanctions but trade measures aiming to prevent Russia from financing its war in Ukraine with revenues from trade with the EU.

Most importantly measures only require qualified majority and avoid the threat of a veto. In order to guarantee effectiveness such a tariff must be dynamic. This is hardly a characteristic of the ordinary legislative process. The primary legislative act should, therefore, delegate the power to adjust the tariff rate to the Commission.

A potential drawback: rules of origin

The Union Customs Code (UCC) sets out criteria that determine the ‘nationality’ of goods in international trade relations (these are known as rules of origin). Article 60 and 61 UCC differentiate between goods obtained in a single country and those where production involves more than one country. Article 31 of the delegated act further clarifies that minerals are considered wholly obtained in the country or territory where they were extracted. This would apply to natural gas that is extracted in Russia and refined to pipeline quality and Russian crude oil.

The origin of oil or gas could, however, be masked if it is transported abroad to be refined or processed ‘resulting in the manufacture of a new product or representing an important stage of manufacture’, or blended with oil from various sources. EU rules of origin consider such a blend to be of non-Russian origin provided that 50,01% of the blend is sourced elsewhere. Some European oil firms have already used this loophole to avoid public outrage over the purchase of Russian oil. The tariff must therefore be imposed on all products containing Russian oil or gas, whatever their composition, and wherever they were processed.

The EU could and should use Article 207 TFEU to complement its sanctions regime by imposing tariffs on Russian oil and gas imports. This would reduce Russia’s revenue from energy commodities without jeopardizing Member States’ energy security during the phase-out. A tariff would also maintain these effects throughout any transitional period, and the revenue generated could be used to cushion the effect of rising energy prices on consumers, and to support Ukraine.