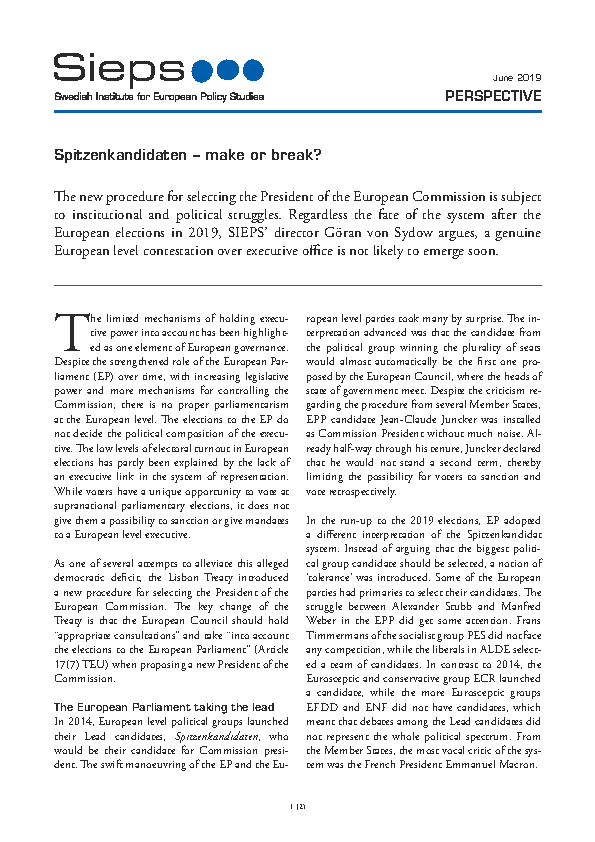 The limited mechanisms of holding executive power into account has been highlighted as one element of European governance. Despite the strengthened role of the European Parliament (EP) over time, with increasing legislative power and more mechanisms for controlling the Commission, there is no proper parliamentarism at the European level. The elections to the EP do not decide the political composition of the executive. The low levels of electoral turnout in European elections has partly been explained by the lack of an executive link in the system of representation. While voters have a unique opportunity to vote at supranational parliamentary elections, it does not give them a possibility to sanction or give mandates to a European level executive.

The European Parliament taking the lead

In 2014, European level political groups launched their Lead candidates, Spitzenkandidaten, who would be their candidate for Commission president. The swift manoeuvring of the EP and the European level parties took many by surprise. The interpretation advanced was that the candidate from the political group winning the plurality of seats would almost automatically be the first one proposed by the European Council, where the heads of state of government meet. Despite the criticism regarding the procedure from several Member States, EPP candidate Jean-Claude Juncker was installed as Commission President without much noise. Already half-way through his tenure, Juncker declared that he would not stand a second term, thereby limiting the possibility for voters to sanction and vote retrospectively.

In the run-up to the 2019 elections, EP adopted a different interpretation of the Spitzenkandidat system. Instead of arguing that the biggest political group candidate should be selected, a notion of ’tolerance’ was introduced. Some of the European parties had primaries to select their candidates. The struggle between Alexander Stubb and Manfred Weber in the EPP did get some attention. Frans Timmermans of the socialist group PES did not face any competition, while the liberals in ALDE selected a team of candidates. In contrast to 2014, the Eurosceptic and conservative group ECR launched a candidate, while the more Eurosceptic groups EFDD and ENF did not have candidates, which meant that debates among the Lead candidates did not represent the whole political spectrum. From the Member States, the most vocal  critic of the system was the French President Emmanuel Macron.

Low visibility at the national level

Like in 2014 the campaign by the European level candidates in 2019 did not get substantial attention in various national contexts. Proposals to add the Lead candidate’s name on the ballot of national parties did not fly. Several national parties are in fact deeply sceptical about the whole procedure and wanted to avoid being too closely related to ’their’ candidates because of political differences. In Member States where the parties dislike the new system, like Sweden, the Lead candidates were not visible in the campaign.

While research demonstrated that voters who could recognise Lead candidates in 2014 showed a small increase in probability of turning out to vote, national parties showed little interest in advancing their candidates and making them known to the voters. In the aftermath of the 2019 elections, the significant increase in electoral participation has already been used as an argument by the European level political groups, individual candidates and the EP to argue that one of the candidates should indeed become the next Commission president. However, it is hard to conclude that the Spitzenkandidat system alone is behind the increased electoral mobilisation.

The institutional re-balancing will be decisive

So, what now? Considering the outcome of the elections, the EP is more fragmented than ever before. What does ‘taking into account the elections’ mean in such circumstances? The two dominant parties, S&D and EPP, have lost their majority and grand bargaining is therefore harder to foresee. The European Council, learning from its slow reaction in 2014, gathered a special summit just two days after the elections. It did not render any clarity over names or the process. In view of the fragmented political landscape, it seems more likely to search for a candidate somewhere in the centre who can indeed be ’tolerated’ by a majority of the house. Whether this candidate was part of the Spitzen race or not remains to be seen. If the purpose of the new electoral link was to introduce an element of European level political competition – notably between ‘left’ and ‘right’ – the political fragmentation of the EP (and the differences of political orientation among the Member States) may result in a situation whereby only a centrist politician can be ‘tolerated’ by a majority, which would counter the logic of the new system.

There is currently something of an institutional struggle between the EP and the Member States in the European Council. The outcome of this process will determine whether the Spitzenkandidat system is here to stay or if it will be remembered only as a one-off experiment in 2014. Regardless the result, a genuine European level contestation over executive office is not likely to emerge in the near future – not least because many national political parties are unwilling to make it happen.

This text is originally a contribution in The Euroflections Report, where over 70 leading academics offered their reflections on the European elections in May 2019. The report, published on the 13 June 2019, was an initiative by the research centre Demicom.