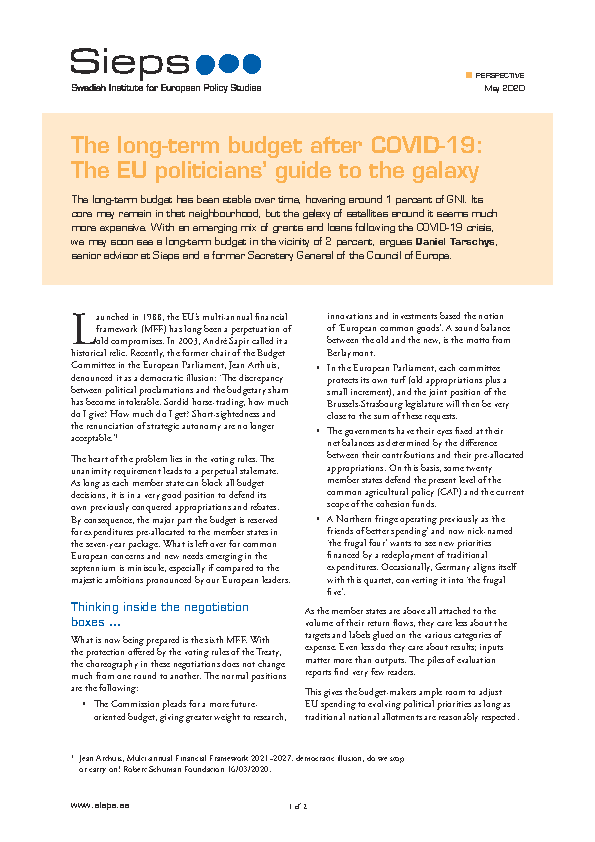 Launched in 1988, the EU’s multi-annual financial framework (MFF) has long been a perpetuation of old compromises. In 2003, André Sapir called it a historical relic. Recently, the former chair of the Budget Committee in the European Parliament, Jean Arthuis, denounced it as a democratic illusion: ‘The discrepancy between political proclamations and the budgetary sham has become intolerable. Sordid horse-trading, how much do I give? How much do I get? Short-sightedness and the renunciation of strategic autonomy are no longer acceptable.’[1]

The heart of the problem lies in the voting rules. The unanimity requirement leads to a perpetual stalemate. As long as each member state can block all budget decisions, it is in a very good position to defend its own previously conquered appropriations and rebates. By consequence, the major part the budget is reserved for expenditures pre-allocated to the member states in the seven-year package. What is left over for common European concerns and new needs emerging in the septennium is miniscule, especially if compared to the majestic ambitions pronounced by our European leaders.

Thinking inside the negotiation boxes …

What is now being prepared is the sixth MFF. With the protection offered by the voting rules of the Treaty, the choreography in these negotiations does not change much from one round to another. The normal positions are the following:

As the member states are above all attached to the volume of their return flows, they care less about the targets and labels glued on the various categories of expense. Even less do they care about results; inputs matter more than outputs. The piles of evaluation reports find very few readers.

This gives the budget-makers ample room to adjust EU spending to evolving political priorities as long as traditional national allotments are reasonably respected. In this way, the goals of both CAP and cohesion policy have gone through many transformations while steadily remaining the two heavyweights of the MFF.

After arduous negotiations, small adjustments are made to secure an equitable level of frustration among all participants in the budgetary process. What is not achieved, however, is enough flexibility should new problems and priorities mount on the political agenda.

As seven years is a long time in politics, they always do. This leaves the Commission with the challenge of meeting many emerging concerns with the small change left over in the negotiations and the unspent reserves that accrue over the budgetary cycle. The latter are especially plentiful towards the end of the seven years which has helped the incoming Commission to find resources for the sequels of COVID-19.

… and outside the boxes

Theorists of budgeting and their disciples in finance ministries are attached to some key principles of the trade. The universality or comprehensiveness principle requires that the budget should comprise all the revenues and expenditures for each budgetary exercise. The unity principle implies that all revenues and expenditures should be recorded in one single document. The annuality principle prescribes a firm respect for calendar limits. The principle of gross budgeting specifies the ways in which income and expenditures should be covered explicitly without any unallowed shortcuts. An assortment of other principles is also at display in the fiscal literature.

Despite these stern sermons, practitioners often find reasons for other solutions. Some initiatives do not appeal to all members of a budgetary community but only to various ‘coalitions of the willing’. The Lisbon treaty provides for ‘enhanced cooperation’ when at least nine member states concur on a new initiative. Such agreements have been made in many policy areas, such as the European public prosecutor and the permanent structured cooperation in the area of defence and security (PESCO). Other activities have been placed outside the Union’s institutions for a variety of practical reasons, such as development aid and the EIB credits.

Spending outside the budget is by no means an EU specialty. It occurs in national and local jurisdictions as well. Scholars of comparative budgeting such as Aaron Wildavsky, Allen Schick and Hugh Heclo have described how the guardians of the public purse fight such tendencies among the advocates in the spending ministries. But there are many ways around the most rigid rules. Fintech has its practitioners in the public sector as well.

In the European Parliament, criticisms are often levelled at instruments beyond its control. As chair of the budget committee 2014–2019, Jean Arthuis was appalled to note how many expenditures that fell outside the supervision of the legislature. He asked his staff to describe this graphically, and his picture of the ‘galaxy’ around the EU budget eventually found its way into the Monti Report on the own resources of the European Union. 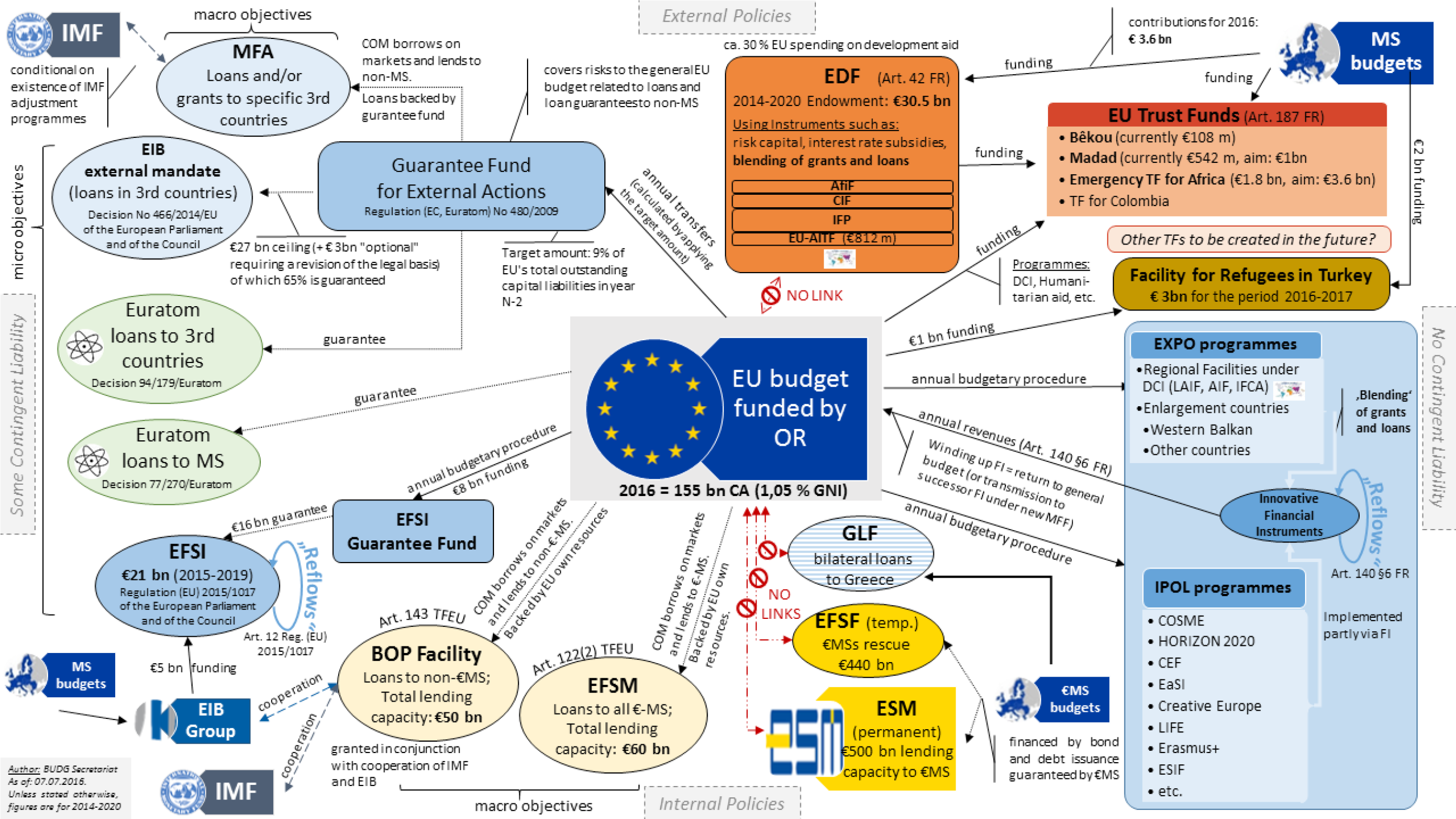 In spite of all pleas to keep EU commitments inside the budget, the trend is clearly going in the opposite direction. When the Juncker commission assumed office in 2014, a restrictive MFF for the next seven years had just been adopted. The Juncker Plan purporting to mobilise 315 billion euro of investments was set up within the framework of the EIB, with a small budgetary contribution from the EU budget.

With COVID-19, new leaps into the off-budget galaxy

The preparations for the COVID-19 rescue facilities follow the same line. Thus far, the Eurogroup and the council have concurred on a package worth 540 billion euro and agreed in principle on a supplementary recovery fund. Many things remain to iron out before such as fund comes about, such as its size, the funding modalities, the allocation principles, the grant-loan proportions and its relationship to the MFF. But everything thus far points towards new leaps into the off-budget galaxy.

Thinking inside the negotiation boxes does not give much headroom for expansion. The universe outside is much more promising. The parliamentarians may be keen to have more control, but if some of that must be sacrificed for a larger budget, they will probably go along. Priorities first.